The Law Society of Alberta is pleased to congratulate Ngaire Androsoff, Rory Tighe and Rachel Weary, this year’s recipients of the Viscount Bennett Scholarship. 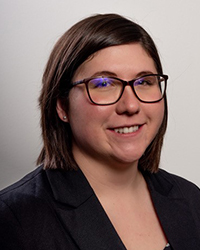 Ngaire was born and raised in a small town in Alberta. In 2013, she graduated with a Bachelor of Arts in Psychology at the University of Calgary. She later moved to Australia to study Canadian Law and Practice at Bond University where she graduated with her Juris Doctor in 2017 and was on both the Vice Chancellor and Dean’s lists for academic excellence.

“Despite the beauty Australia had to offer, and the challenges I would face in going through the accreditation process for my degree and obtaining articles as a foreign-trained lawyer, I also knew that Alberta was and would continue to be my home,” says Ngaire.

After law school, Ngaire returned to Alberta and in 2018, she received her Certificate of Qualification from the National Committee on Accreditation of the Federation of Law Societies of Canada. She currently works at LawDepot as legal counsel.

Ngaire accepted an offer of admission to the Master of Laws (LLM) program at the University of Alberta where she will examine the interaction of the control of fake news and freedom of expression guaranteed by the Canadian Charter of Rights and Freedoms.

“I’ve always been interested in issues related to the Charter and I noticed during the elections, COVID-19 and everything else happening in the world, a lot of people on my social media were sharing fake news posts,” says Ngaire, “It made me wonder if there are ways to combat the spread of potentially harmful misinformation without going too far and limiting people’s freedom of expression.”

Ngaire is appreciative of the opportunity to pursue something she is passionate about with the support she is receiving from the Viscount Bennett Scholarship.

“I’m really honoured to have received this award. It’s exciting to know that something I’m interested in researching is something that others in the profession also see value in.” 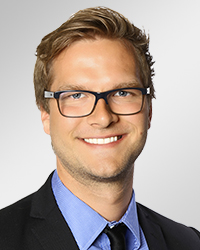 Rory completed a Bachelor of Arts at the University of Alberta, with honours in Economics. He went on to study at Queen’s University, earning a Master of Arts in Economics in 2015 and a Juris Doctor in 2017.

Rory was called to the bar in Alberta in 2018 and now works as counsel with the Department of Justice in Edmonton where he conducts litigation matters in tax, general civil and Indigenous law.

Along with working at the Department of Justice, Rory is currently pursuing a Master’s in Taxation at Oxford University through a two-year, part-time program offered through Oxford’s Faculty of Law.

“My main interest in tax is from a public policy perspective. Tax is a key component of public policy both because of the way it shapes individual’s behaviours and because of the way it shapes government expenditures. Taxes are the primary way that governments fund programs and are also one of the main tools for wealth re-distribution. I have studied both law and economics and believe each has an important role to play in the design of an effective and just tax system,” says Rory.

Securing funding for his academic pursuits was challenging as Rory says there are not many scholarships available for part-time students and student loans are generally not accessible to students studying part-time outside of Canada. He is grateful to be a recipient of the Viscount Bennett Scholarship and hopes to see more financial support for part-time students in the future.

“Encouraging part-time studies makes a lot of sense, especially given current trends in education. It can be very beneficial for students. In tax law, for instance, I have found it incredibly helpful to learn the material through a combination of academic studies and work experience. Being able to apply the material I am learning in my courses at work has greatly helped me wrap my head around new concepts. I’ve found that my studies have been improved by my experience gained at work, and my work has been improved by the perspective I have gained from my courses.” 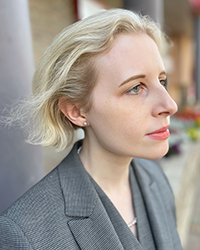 Rachel is a graduate of the University of Alberta Faculty of Law where she earned her Juris Doctor and was awarded the Horace Harvey Medal in Law for highest standing in the graduating class of 2018. Prior to law school, she also obtained a Bachelor of Arts with distinction in English with a minor in Classical Languages from the University of Alberta.

Rachel has strong ties to the Edmonton region and legal community. She currently practises civil litigation and wills and estates at a boutique firm in her hometown of St. Albert, but she will be returning to the University of Alberta in September 2021 for the LLM program.

Her research will investigate various legal questions arising from the Alberta Guarantees Acknowledgment Act (GAA), including whether the GAA adequately protects unsophisticated guarantors from assuming obligations they may not fully understand.

“It’s remarkable how much trouble this tiny statute has caused. The biggest issue with it is that it’s just not clear what it’s actually trying to do,” says Rachel. “We don’t quite know what degree of protection it’s actually supposed to provide to the average guarantor, and we don’t know to what extent it’s actually accomplishing that.”

Rachel is thrilled to be a recipient of the Viscount Bennett Scholarship and looks forward to resuming her studies at her alma mater.

“I am excited to return to campus. I enjoy my life and the people at my firm, but academia is where I want to be. It is so wonderful to receive this vote of confidence in my proposed research. I look forward to coming up with some practical solutions for law reform and delving further into Alberta’s legal history.”

About the Viscount Bennett Scholarship

The Viscount Bennett Scholarship is funded through a trust established by the late Right Honourable Viscount Bennett. It was put in place to encourage a higher standard in legal education, offered to support those interested in pursuing post-graduate studies in law. This prestigious accolade is awarded to individuals with an exceptional academic record and a clear dedication to contribute to their community through the practice of law.

Fill in the form below to get in touch with the Indigenous Law Mentorship Program.

Fill in the form below to get in touch with the Mentorship team.

Fill in the form below to get in touch with the Education department.

Fill in the form below to get in touch with AdvisorLink

Fill in the form below to get in touch with Accounting

Fill in the form below to get in touch.

Fill in the form below to get in touch with Communications and Media Relations.

Fill in the form below to get in touch with SoloNet

Fill in the form below to get in touch with Election

Fill in the form below to get in touch with ALIA

Fill in the form below to get in touch with the Equity Ombudsperson.

Fill in the form below to get in touch with Custodianship